Having been untertaken a new x-ray investigation by the chief-surgeon, who does support athletes during triathlon competitions even on the Hawaiian Islands at the IRONMAN world-championships, early in January, well, he advised me to better remove the titanium in my arm in the off-season and not now. However, I was given green light for all three disciplines and any triathlon competitions, too. Actually, I am really happy of not having lost my arm. And now I am allowed to swim, bike and run again!

Thus, it made sence to repair my bicycles, especially to renew gear systems, completely. Both material and the repair at a mechanics is round about 400 EUR plusminus a bike. It depends on the components. The last months time was plenty of, enough for checking the web for fine offers. In sum all the new gear-system including special keys for that kind of mechanics were at 90,- EUR a bike. Besides all the keys necessary for the propper adjustment of the sprockets and shafts a compass is needed to bring calibration to its perfection. 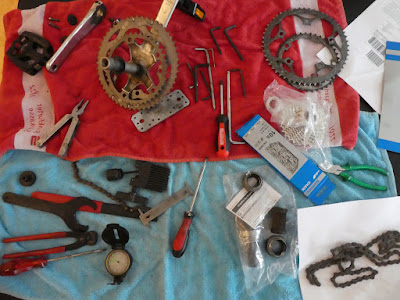 I do not need a therapy, I need to ride my bicycle.

Resources are precious. To safe power is trendy. Here in Germany many people are aware of taking care. Going to work by bicycle is one way. Renewing and rapairing things another. It is said of Germany to be the world-wide leader in affairs of protecting environment and nature using regenerative energy-supplies, water, wind and like solar-power also. Our town is politicial regined by the party of the ecologists. Moreover, high-technology is in use. Energy, that stems from inducted electromagnetic fields, for example. Some househods are free from gas and oil as a fuel and produce own electricity for to run computers. "Green" power as well as digitalisation, glas-fibre-networking and the aspiring artificial-intelligence-technologies make people work by clicks from home. It is called industry 4.0 (revolution as of the invention of the steam-machine [industry 1.0]; revolution as of the introduction of assembly-line [industry 2.0];  ongoing growth as of IT and computer-systems [industry 3.0]; new wealth as of networking and AI [industry 4.0]), controlling intelligent robots, that do produce individualised goods by remote.

However, this technology, like special electric-engines steered by AI, is forbitten to use in bicycles in any competition. Thus, bikes bypass x-ray investigation before a races. Sport is supposed to be a constant, yesterday, now and tomorrow, no matter of what technology brings. Sport is a means in order to find out of what defines us as humans. In affairs of triathlon to fight with the elements water, wind, heat and gravity and our own limitations to time.

Let's see what the ongoing season brings. Being confronted with ice and snow in German winter now, well, what is next is a focus onto the first discipline. So I have to go to indoor-pools rather often. Sooner the air will be warmer again and time for rides comes. 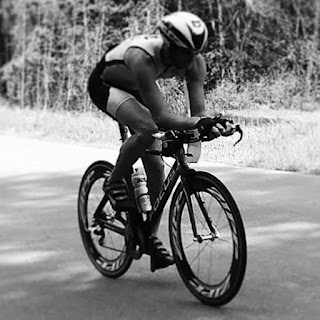