Not as fast as my Audi but still, having slept well, last Sunday it was time to make prove move training to competition. Time to beat had been 2:18 h min from 2015 in Ingolstadt that time. The alarm-clock rang at 4:40 o'clock. So there was time to travel easily, to fetch start-number and for bike-check in as well as to twaddle with athletes.

Being placed in group 1 my start was 10:10 a.m., together with 199 others having to do a triangular 1500m swim course. Water was fresh at 16.8 ° C, but good to swim with neopren-suit? Not really, as of being part of a rocking pack one is more shocked in case of getting too close to each other, e.g. my swim-glases had been beaten of my head. Rather slow, after 26' 25'', I entered T1 and needed 4'14'' to get onto my bike. Why so slow? No need to take risk and therefore using click-predals as of that titanium that is still in my arm. Sure, meanwhile the bone is so hard and healthy suitable to damage the asphalt, a rookie joked.

The bike-split is a fast course, however, good attention is to pay. Two times I was skilled enough to avoid accident. In aeropostion an empty bottle of water was to overcross and another time a very fast athlete overtook me while I already overtook another, slower one at a speed of 42-43 km/h, thus three athletes on one side of the road in aeropositon. It had been centimeters only. Finally, I came to T2 after 1:07:03 h min sec on the bike, not too slow and not too fast. In good mental condition I managed to leave transition-zone in 44 seconds. 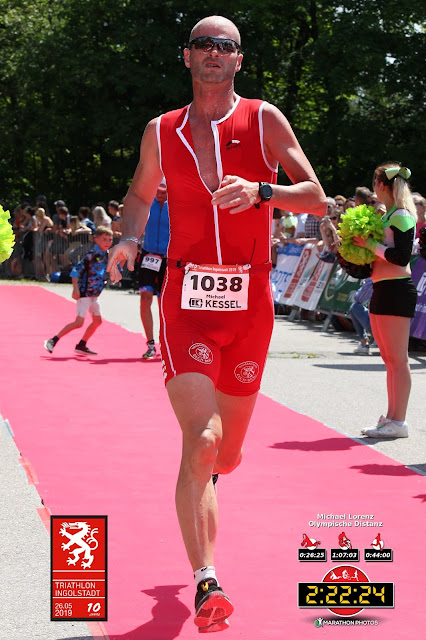 The last metres along olympic-distance in Ingolstadt.

However, the first k was hard and rather slow in 4:24 min sec. Somehow it was really hard at this stage of the race, surprisingly. The run-split was a two loops course around the lake. Well, race after the solution was clear: legs had been hard as of the bike-split, because combined bike & run training was neglected. With the begin of loop 2 running became more fluid, k6 I could run in 4'10'' and k7 was little slower. But like in 2015 I lost a lot of time k8 and k9 and do not know why. Sure, exhaustion and pain increases. Luckily Don Indi cheered on athletes by microphone and loudspeekers, so that I could speed-up the last 400 metres. With exactly 44' the run-split is a little slow, but ok, as well as my total time is 2.22 h min. Finally, all competitors gathered in the athletes garden and "King of Kona" Patrick Lange gave autograph session and honored the most fast later.

Rehearsal for Ironman in Nice, France, went rather well, but there is still plenty to do: 1. combined training bike & run, like e.g. easy long on bike and long-run after or hard on bike and long-run after. 2. I need to loose weight. 83 kilogramm is too much as of Nice's bike-course contains 2095 metres of elevation. And 3. I need to stop smoking, especially before the race. And this is the advantage of competitive sport at semi-pro level. One can drink, smoke and have sleepless nights. Not so on the professional-level. Thus,

above all I am happy, being in one piece and contended as of the result. Let's see what season 2019 brings. Fun like in Ingolstadt, of course, a race that must be recommended! 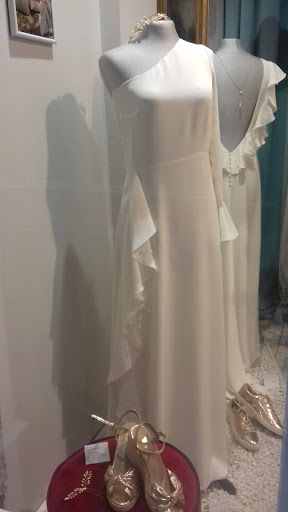