The alarm clock rang 3:42 a.m. After some flakes and coffee I went for to meet friends at the parking place of a supermarket at 5:00 to lead the convoi to Ingolstadt Baggersee. Here we parked nicely and early, did unload the cars and walked to the areal of the event being celebrated. First we fetched all the paperwork, prepared our stuff and checked in. There we met more friends, and also Faris, whom I am very grateful for picture. 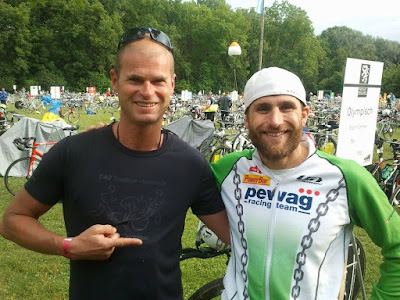 Sun became more hot, however also for short-distance neo-suits had been allowed, 9:15 a.m. the first block was started. Olympic distance had some few minutes delay, as of the laudation of the world-champion, who will quit carrier this season.

The first meters to the first turn had been not too hard, there had been a lot of hits to stand in the rocking pack, however, swim-glasses, head and stomache, also some other parts of the body were not been beaten too heavily. It was reported that other athletes did puke in the lake as of this. Finally, after the second turn, the pack became streched, I found my rhythm and started clocking 1:38/100m not too fast. When gravity changed at swim-exit by 25:19 min sec I had the power to overtake two athletes while sprinting to my bike, taking off the cap, glasses and neo-suit till to the waist parallely. In transition-zone 1 me, I was slow. 2:44 min sec is not really fast.
Also not too fast the first 2k on bike had been! The small street was made more narrow even so it was not allowed to overtake. Thank you to the athlete ahead which had speed 30 km/h! However, after those 2k bike-split become powerful and rather fast. I managed to bypass the 10k-mark in 15:21 min sec and the 20k-mark average speed was even slightly above 40 km/h. Few climbs reminded the athlete of third discipline having to be done also. Luckily wind was not strong, nutrination on bike testing new liquids had been ok, dog-fights had been hard but pushing. The last two 2k were slow again both as of the narrowness and as of the preparation for the run-spilt. Finally my own clock stopped at 1:02:51 netto at the 40k-mark extra meters having to be done till bike-park not included.
Transition 2 then was ok, 1:55 in sum. Maybe next time vaseline has to be put into shoes instead of socks! Still in time I went hard pace first three K in 12:15 min sec. However, the negative effect of less training-kilometers the last months was felt now and I took out speed till K5, where I was psuhed by my friends. Another faster K was added. But unfortunatelly this was too much. So at K7 it was clear not to be sub 2:15. Despite of the heat on the track now running was fun. Clock stopped at 2:18:55,1 and generates rank 74 overall and 12 in my age-group.

Having had pan-cake, isotonic-drinks and beer the more relaxed part of the day started to enjoy a very nice afternoon at the lake and to cheer up half-distance starters. Thank you to all who pressed thumbs and thank you to all for great atmosphere and spirit.

Sure there should be added some critique. Like I did predict in an article at DNF-is-no-option blog some time ago triathlon developed to be a sport for rich people only. However, not everyone needs  time-trail-triathlon-machine e.g. to be a part of. Also the huge speed of race-slots to be sold out is really something. And to wear trendy clothes is also not really needed. Triathlon become a market. For high quality stuff people are ready to pay. Actually, this is ok. As it makes fun!

Good to know there are also more and more athletes who do not need all this functional stuff, technique and labels to be a part of the triathlon-family.
at June 15, 2015 No comments: