My training for the ongoing season starts tomorrow. First competition is a 4-round course, 3k each. On 6th of January. There might be some further run-competitions in spring a long 10k before in Mai triathlon season starts to be competed.

Up to now I do not know according to Joe Friel and his book called triathletes' bible, well, I really do not know up to now how fix A-, B- and C-priorities, although Ratisbon should be a fast race, maybe world record can de done there? It has 600 mtrs less elevation than world-record-course in Roth thus 600 mtrs of elevation in sum. Altogehter 600 participants are allowed to compete in 2017. Good I got registered on time and am at the start. For sure I try to be faster than in 2016. So, like every season a lot to do.

To keep have fun in training and competition is still most of importance. However, I was very lucky in that kind of accident. I was lucky and am whole again all healed. Health and saftey are 1st priority. In sum it is questionable if '17 will be as fast as '16. 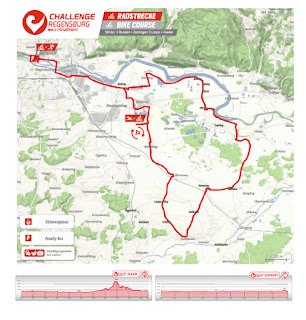 Surprsinigly the bike-course of Challenge Ratisbon had beed made new. It is rather flat terrain 600mtrs of elevation to be done in three rounds. A 3-loop fast cousre, and this is, in my humble opinion, exactly what a German Mastery needs.

As for the silde show thank you to the company of SAMSUNG for support an protection, thus the show is suitable for an international audience of all (age) groups.


Last season was a success. After a series of three times run 10k-races I was ranke 2nd in Kallmünz my age-group personal best also in 2:20 h min olypmic distance. Ranked 8th in my age-group at the triathlon at Rothsee, well, with 2:19 h min I was even faster, having fun there to run the 10k run-split in 39:56 min sec. My A-priority race was in Ratisbon in 2016, finally I was ranked 100th over all there. Last but not least my personal best along the 10k solo went down to 39:44 min sec late in season. A bike-accident made me stop to compete Frankfurt Marathon. All in all a successful year. Thank you to my sponsor and to those who pressed thumbs, friends, club-mates and acqaintances.