training and fun on Lanzarote

Like announced a training-camp is supposed to be a good idea to get fit for competitions. And it is. Especially to get fit in the 2nd discipline, and especially if kilometers in the 3rd during winter, running, had been plenty.

It is discussed among both tourists and travellers, sportsman as well, of how long a stay on the Canary Islands makes sence: few days, a week or better 10 days or even two weeks and longer? Well, it depends, but 10 days is good, not too short and not too long. Having started from Munich Airport 5:50 A.M. the first day it was possible to go for a bike ride 60k / 1200mtrs of elevation. Two days of hard training followed: a 120k bike ride plus 4k speed run after and a 90k ride the thrid day with a 12k trail run along the rocky coast. 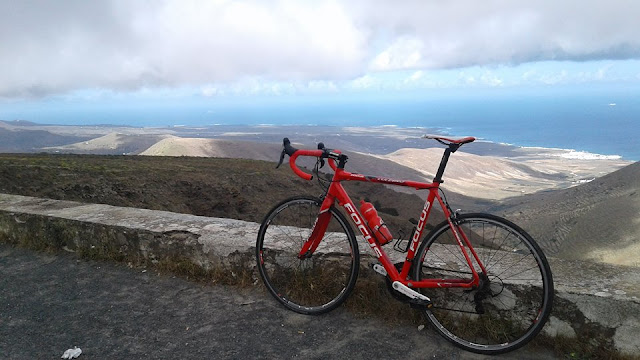 The 4th day I took the bus to La Camara and went to a surf-course. After some training on the beach I was allowed to go and ride my first wave. It is great to feel the ocean's power and to stand on the surf-board. Happy of this experience I hang off with the surfers, nice people, and walked back home in the night using head-lights on a single-trail described by the surfers not listed in any tourist book in order to get fetch Taxi from Teguise to Costa Teguise, the town I stayed, strategically excellently located for bike-trips. Thus, the 5th day was a day off, time for sandy beaches and cooking together in the club.

The 4 days left focus was on cycling. Luckily wind was strong and uphill the "Timanfaya Road", where volcano activity is still seen today and flesh is cooked on hot stones e.g., well, the wind was rather strong so that some cyclists got off the bike there. Some local triathletes located at Club La Santa, a very pleasant atmospheric sport-club with the most fine pool anywhere on the Canaris, well, some Pros said of the wind is like the Mumuku on Hawaii. Sun blared down and heat was hard. This way I got impression of what Ironman-Triathlon Worldchampionships is about. Not kindergarden, definetly!

Altogether Lanzarote is worth its price. If you are interestend in sports, cycling, running, surfing, kiting, trail-running, swimming and diving, yes, and in some evening action at the tourist hot spots like Puerto del Carmen or Costa Teguise. Service and Support, thus infrastructure is great and local Spanish people are like Spanish people...- better to know some Spanish. Most best is nature: a mixture of destroyedness and beautitude created by craters, vulcanos, magma-fields, stones, bizzare rock-formations that make you think you are located somewhere on the moon. In sum, for me, it had been 700k on bike and 9700 mtrs uphill within 10 days at best weather conditions within the middle of the elements.

What is next is to focus on the 1st discipline with the 1st of May, when pools do open here in Germany. Untill May kilometres as many as possible to do has still priority. We'll see where to go next. May be next blog-post is about Northern Italy in order to meet people, who stayed in Club La Santa and make miles in the alps, too.