Triathlon after normal it is recommended to relax and reload batteries, regeneration is needed to recover from stress, both mentally and bodily and sure the body needs to rest race-after. Somehow I decided on Sunday to start to bike testing my new electronic equipment in affairs of bike-packing.

pic 1: my bike new electric equipment on in the low-rider system (front) at the lake of Happurg
The first kilometers had been easy and after a break, some twaddling and a beer at a camping-site in Etzelwang it was fun to ride on single-trail and cross country direction to the East, to reach the fishing ground as of me, licensed for a life-time, I took my fishing rods with me (as you can see on pic 1) 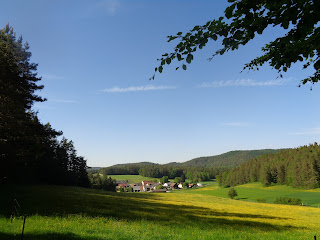 pic 2: this houses are where I do train with racing-bike alonga barred road in winter, wheres in spring, sure, off-road biking is possible
Actually it was planned to stay overnight at Monte Kaolino camping-site, but hunger was strong, so in Hirschau I discovered Istanbul Döner store to my surprise and ate a lot had cool Cokes and recovered until decision was made to continue riding in the twilight at full moon. 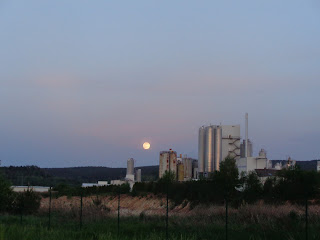 pic 3: famous sand factory at Mt. Kaoline Hirschau producing pure white, Sunday, 15th of May
Having to have set front and rear lights it had been another 25 Kilometers to go at night to reach the lake for fishing and camping. Luckily, having arrived lately at Sunday, I was the only one there in an area we call Bavarian Canada. 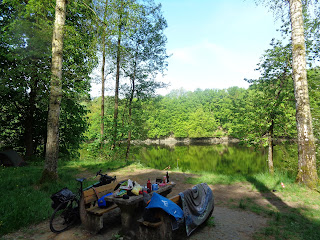 pic 4: the next day, Monday, 16th of May
Having had a good night in the tent fsihing was fun, caught two fishes, a breese fish and a rahter big carp a little later. I decided to make fish-soup out of it (pic 5) and made no fire. Then, all the loadings had to be reordered onto the bike. Outward journey took me 113 kilometers, return journey was 100 kilometers, back along rivers, Mt. Kaolino, Istanbul Döner in Hirschau, but the, without detour, the straight way home, having had alcoholics at filling-station in Sulzbach-Rosenberg and at Papa Joes in Etzelwang, before the last 35k had to be absolved in the sunset. 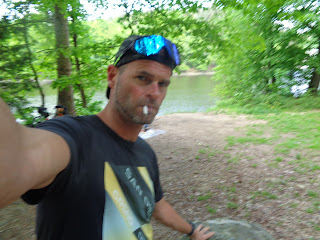 pic 5: having had to smoke while preparing fish-soup on Monday
All in all I was 12 hrs and 12 minutes in the saddle at an average of 17,6 km/h and loadings like normal between 25 and 32 kilogram. Was fun to ride, camp and fish. With the new equipment, including a new world receicer also, I can directly load with solar-panel. Having had some beer after arrival and fun to explore the treetops and see through to discover the stars, well, I found out with my own eyes of the Earth is moving listening to the music, that stems from radio "Coca-Cola" (pic 6). 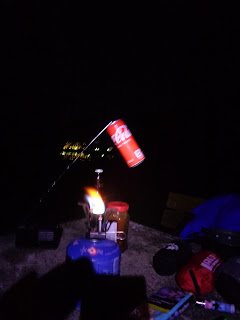 This reminds me to a good old joke: "Who had been the first on the Moon? Well, it had been the Russian. As of the Russians on painted the moon all red. The American were second, but wrote Cola-Cola on it."

Yesterday there was a very well done organized triathlon in Southern Germany, the district of Oberpfalz, in a town called Weiden officially along the Olympic Distance (OD), but the distances were a joke as of OD is normed to 1,5 - 40 - 10 kilometres. Finally I was ranked 2nd my age-group (professional) TEAM ERDINGER ALKOHOLFREI in 2:29 h min officially. Even the my swim start was a disaster, I was too late at the start and had to battle the field, with approximately two minutes more on the clock as of me having been too late, from behind. A guy from the us_army was even more stupid I guess, he overtook me the second lap while the swim-split. Actually I was not too late as on my watch I was one minute at the start-line to the water before the start. How came? Twaddling with athletes from German army and national league and having had seven beers the day before I thought I was in time.

After two to three minutes in the water contact to the end of the field could be established the first round in the Weiher (lake). Guess I was clocking 1:40 min sec pace  / 100m. That was completely all right ciao, as of the having set competition to C-priority. Round three it became fun to swim, however the swim-split was over, already. After 20 minutes like that. I did not start my watch time meassure that time in the race.

Took too long, needed to run round about 300 metres to my time-trial bike and wet-suit to undress was hard as of the transponder-chip, more over I twaddled with athletes. Guess my first tansition-time was 5:30 min sec.

The four rounds bike course was nice to bike and I came back after 1:03 hours min according to my chronometer on the bike. Was fun to ride despite of a technical problem with the my bike's gear system as I could not up-shift to the heavy gears. However, I found out on the bike as of the course was too short, thus not 40k like it was said it is.

Took some time, maybe three and a half minute.

Rather motivated, now, I really believed to run sub40 min the 10 kilometres as of the years before and according to my personal experience the 4 loops run-course was 9,6k, only. However, the 1st round took me 7 min 30 seconds. Asking the audience by loudly shouting as of how many loops to run while running I got different answers by the audience shouting back loudly as well, thus the answers were 4 and 8 loops. The second loop was 6 minutes and 30 seconds. Thus, well, I decided to keep that pace as I knew of the professionals a round is 1,4 kilometers. Race after the women professionals told me of the course is 1,6k a loop one according to thier satellite computers. Meanwhile in round 3, I kept pacing and found my pace no need to speed up as of C-prio I personally shedulded this competition in Weiden (Germany). Round 4 it became fun to race harder as of I knew I will be successful. A running athlete on the track told me it are 8 loops to go and the calculation is easy, thus 8 multiplied with 1,25k. This was a little insult, but for me it sounded like music as I knew I had to go for 8 loops. So decision was to keep pacing 6' 30'' this that "mile" (one single loop) the my 5th loop.

Meanwhile the organizer cleaned the air by the loudspeakers and thier anouncement as of the run-course is an eight loop one. Thus I was sure to keep pacing the 6th loop and ovetook a competitor I destroyed during the bike-split on my bike, he did overpower, i guess, thus I overtook him the last and 4th loop the bike-course shortly before the last 180°-turn from North to South heading transition-zone then, again. On my watch I started when leaving transition-zone the second time, well, well, then also the counter on my clock showed of the 7 like the referees did agree on. So then in the my loop 7 I really enjoyed my running, but then in final lap already and thus the las kilometer ahead soon, well, I needed to something having ovetaken Dieter Wolf in the 7th round. Now again - means: good morning, good afternoon and good night - and I needed to avoid of being accused as of the my lazyness, well, I kept pacing the 8th and final round and sprinted in the last 200m, turned right and hurried up the last meters big steps to cross the finish-line. Offcial time in sum was a very high 2:29 min sec, thus below two and a half hours. The time for my run-split on my clock was 54 min 44 seconds.

The winners had been honored. Me also as of my silver-medal. Thus I had a beer free of alcohol, unluckily it wasn't ERDINGER ALKOHOLFREE, but Maisel I guess, also a very good beer. at least. Thus I decided to drink another one.:) Luckily Faris (former trainer ELITE TEAM GERMANY, our national trainer) was not there, otherwise I really would have to be in the need to race hard. 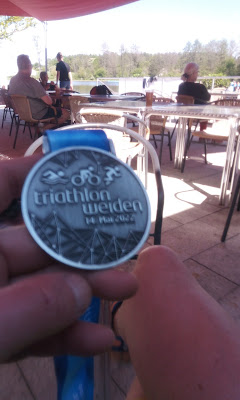 Check-out went fine, we I myself Trimichi took B470 to pay Eschenbach (i.d. Oberpfalz) closely to military area Grafenwöhr a visit. There, I took a ride further in the my AUDI as of sponsors, German Mastery along the middle-distance this year in Ingolstadt very late in May, paid the parking-place of the local hotel a visit and drove away. Then I had a meal at McDonalds closely to Autobahn A9 and finally I paid ice-cream-parlour a visit.

The onwer, his name is Sandro Tempesti, invited me to an espresso.There we sat on his bench. A big plane of there Bundeswehr, probably Herkules Transall, was our all witnesses'. Then Sandro closed his ice-cream parlour, I finished up smoking, too, dorve off and bought tobacco at in the a local-filling-station. A red Ferrari (looked like Testarossa, but I am not sure; wasn't one of the Eighties, but looked a alike imho, my first impression as of the world famous Testarossa FERRARI red) made noise, when I went out of the filling-station. Finally I had a true beer, one with alcohol in, I mean, at home then, after I unloaded the my equipment and stuff from the AUDI 1st, for sure and of course. And not before.

Tipp: always have Klo-Paper (Klopapier) in the back of the car.