Ironically, what weather-god had in mind with the Laufer triathlete Michael Lorenz. While the early summer heat was already causing quite a stir in his country, heat record of up to 45 degree celsius at the top in France were also reported in Nice. The long-distance triathlon at the Cote d' Azur is due to swimming in the sea, the bike-splits elevation with a rise as its heart of 23 kilometers nonstop to the Col des l'Ecre up to 1200 meters and a technically difficult descent back to the cosmopolitan city one of the deamanding and a treachering racees among in the ironman-series. Under tropical conditions to do it had been a top difficulty to finish on the Promenade des Anglais in the final thrid discipline.

Since the supposed catastrophee had occured already, due to the weather, all that was needed was to reach the finish-line healthy. Bad crashes in the mountains -  dehydration caused errors in steering and technical defects (tyre blowouts) due to the heat - as well as ambulances' blue lights every minute at the final run-split give an idea of the classical race was not a children's birthday war in 2019.  Heat and profil the 3000 athletes from 61 nations had been the more to note. Nevertheless, despite of cooling by showers and hectically installed water hoses, 700 athletes collapsed. Many spectators carried bottles of water to the track, so mitigating the agonies and gave frst aid. Breakdowns are part of the long-distance triathlon. But this all did not spoil the audiences and the jet-sets partymood. This special atmosphere and encouragement, which does happen at Ironman France in Nice only, helped the athletes not to give up.

Michael Lorenz announced the competiton very well, swam slow with 1:09 h min by his standarts, mastered the bike in a decent 6:02 h min, the running track in 4:09 h min. The moderater did not miss the opportunity to mark all finishers, especially since Hawaii was in Nice as of the heat-record this year. After 11 h 38 min the Laufer athlete crossed the finish-line overjoyed and fulfilled his dream of a knighthood: "Michael from Germany! You are an Ironman!", it sounded over the palm-lined promenade. 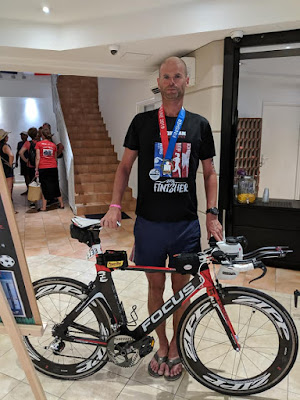 Race after he had to answer questions.