dear readers, and new friends wellcome, it is a very well-known saying that a picture says more then thousand words. Triathlon isn't a one-man-show, it is team-play also. It is the team, who does give you power, your sponsors and coaches your team-mates, sure, but most important good friends are.

The training-camp in Spain on Fuerteventura from 21th to 28th of April was a full success. As of so many different training like swim, bike, run, surfing, beachvolleyball, beach-racket-ball, tennis, mountaineering, spa and even billiard and darts. However, it had not only been Multisport (a german word) that was responsible for fun. Another key-factor of successful training is team-playing and team-leading. 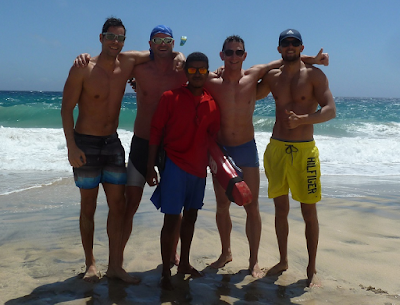 Täschi, Micho, Heiko, Aaron (from left to right) together with our life-guard at playa Morro De Jable, Fuerteventura, Canary Islands, Espania at 27th of April 2017


In sum, us, we only made 500k on the bike each. However, it had been a super bien holidays. Plenty of sun, birthday-celebration, kind people, Multisport actions and so forth and thus variation, vacation and events. What else to mention? The night from 27th to 28th of april first rain fell this year (en abril aquas mil...). A guy called Julio found us and drove us back to civilization when we had a broken bike where no signal was available.  And the gold medalists in beachvolleyball of the olympic games in London 2012 made a fantastic show at Robinson Club one needs to see with own eyes.

Next week will be a regenerative and compensative one. Then extensities are planned to be amplifyed and as of the foundation of our new team named TERMINAL 90 TEAM with me on the bike going to race hard in relay-competitions.