Meanwhile a lot of training-kilometers had been done in the 3rd discipline in order to get fit for Frankfurt Marathon late in October. Training is not competition. Thus, training-data had to be set onto the competiton-level. It is widely spread among endurance athlets to run a half-marathon before in order to calculate big-race tactics.

On 19th of September it had been a good opportunity in Neumarkt, Bavaria/Germany, to run half-distance 21,1 kilometers, a two round course, together with 1300 athletes, who had been runners mainly, specialists, and thus no triathletes. For pictures and impressions fetch  the event (may be you discover me in the crowd 1st picture ;-) click link below.

Well, the first three kilometers had been slightly downhill on a 10,55 Km course. My marks had been 4.08, 4.09 and 3.59 min sec /k...- this pace would indicate a final result TOP15 with a time of 1:25 h min. A too huge speed in the beginning of the race! Two month of intensive training is not enough to compensate the loss of fitness as of the accident. So I started overmotivated and like a rookie! Taking out speed at K4 did not help so much and  I felt it will become a hard race, bypassing Km5 in 21:15 and 1st round in 46:12 min sec. This way the second round became hard, especially the second half of the course, that contains some metres of altitude and also when sun became stronger. Friedemann pushed me to get through it at K17 an reminded the very fact a race is not birthday-party and there is no other way as to fight now! 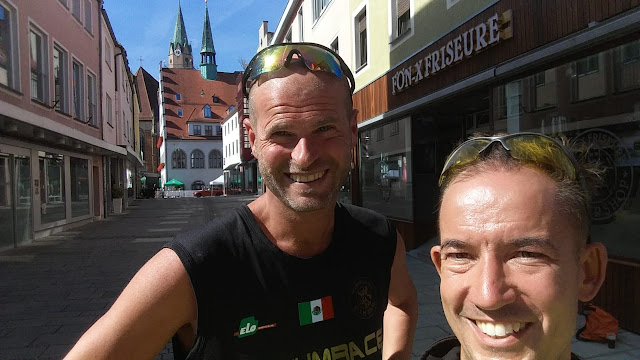 two triathletes race after, me and Friedeman

And that is exactly what was needed. To remember fight and competiton! With a time of 1.35.37 it was the 58th place altogether and 7th among master athletes.