First of all, for all, athletes, team-mates and supporters it had been a nice day, Sunday 25th of July 2017.

Thus thank you to the organizers, who did very well in creating a good race, including support and entertainment, as well thanks to all the helpers, who made this triathlon-event go. Event, atmosphere, kind people, having met acquaintances, friends and fans joined-in, family with us, well, this all made us feel great and we knew we will have a nice day all part of the triathlon family. 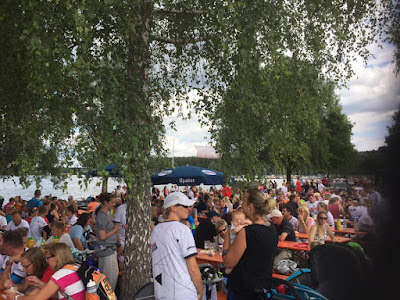 Like mentioned before it has been a "Schnapsidee", an idea born out of having a Schnaps, liquid high-percentage alcoholics, to register as TERMINAL 90 TEAM, so well, how to say it? May be like this: actions are louder than words!

On Sunday I was altered 5.22 AM and needed to go for to start check-in proceedure. The referees had been strict, thus equipment 100% oki was allowed only to be taken to the start. The field was launched at 10.05 AM, with Heiko in the leading group the first 500m. Despite of water was slow, neo-suit forbidden and also as of the course had been much more longer than 1,5k, Heiko had been among top 15 after the swim-split. Thus 1st discipline went not too bad. It was our own fault transition 1 was suboptimal, thus we lost important time and sure we need to exercise those routines. Somehow overmotivated, me, I had been pushing too hard the first 10k on bike having overtaken 7-8 athletes of our category, so when the course came to its cruxes I needed to go beyond limits but lost 2-3 positions again. Fighting against the very strong wind that day I was close to puke when the bike-split was finished after transition two. Then, it had been Heiko´s turn again to make good result go work by having made an awesome tactital 10k-run. A little overmotivated also for the first k - at a two round hilly 5k-course - he went in unbelievable 3:18 min sec, pushed fruther and uphill like hell, and was pushed by friends and family in order to make concurrents keep distance. Finanlly, the clock stopped at 2 hours and 23 minutes. We finished 7th and had made a good job. 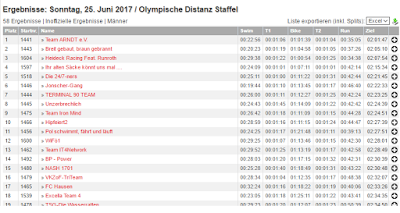 annotation: we did not train specially for that race, so may be next year it is needed to go faster. TERMINAL 90 might be there with TEAMs the next season, where it is planned to make good pictures for sure. Be prepared - we'll also.

relay at triathlon of Rothsee

unfortunatelly, I was injured while in military mode at military base by my own high-kick the last week, and thus a muscle in my right leg needs break. Therefore it wasn't possible to compete short distance in Kallmünz, a very romatical town in Germany close to Regensburg, where CHALLENGE Ratisbona is going to be celebrated for the 2nd time.

Hindi bale! that is Philippinian for: doesn't matter. As of meanwhile i need to write about a topic of interest I like a lot  at University, thus a break is not that much a bad idea and for sure I had been in Kallmünz, where imho the world's most finest triathlon had been done last Saturday, for taking pictures, fishing and having a beer, for to twaddle to people and athletes and for to motivate athletes on the tracks. 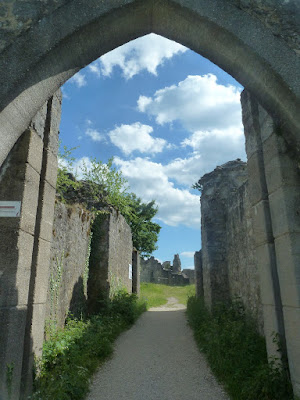 You are once upon a time in Kallmünz? Do not miss to see the middle-aged ruin.

The next competition is a relay with mi amigos y compañeros Heiko and Domi G. at short-distance event at the lake of Rothsee, with Domi not yet fit as of food poisoning, who does recover as well. At least Heiko is fit yes year, already. However, yesterdays time trial training was good and thus I believe we can go for the time registered in as TERMINAL 90 TEAM to-ten result. Regards to our sponsor witherein.

Greetings from the air-base of Grafenberg to the town of Nuremberg and to where ever you are. So let´s see how we all do perform. Press thumbs for us all to make keep staying safe and healthy, and pray for us to make a good performance at Rothsee-Triathlon (http://www.rothsee-triathlon.de/) two weeks ahead from now on.

P.P.S.: fully resposible for the bla bla bla, blubb blubb and blubb on here is me, and also the owner of this blog: www.dnf-is-no-option.com, where i am a free employee who does work within the parameters of the state´s contract of the Ferderal Republic of Germany / regards to kai baumgartner this way also..