Winter time, silent time. Time for recapitulation. Time for making plans and registration on races. To get early birds bonus' ? Not so. And also time to get prepared for the next season, that is a golden one for all athletes.

According to experience and circumstances next year will be a "golden year" for German triathletes. First, it is to mention that both JF and AHA will compete at "best old race", like CW said, that is Challenge Roth, Anno 2020, 5th of July. Both Hawaii-Winners, Jan Frodeno (the Frodominator) and Anne Haug, who had been awarded at German Sportists Of The Year 2019 2nd place by journalists, do compete. Moreover, JF is favourite, sure, not only within TEAM Bahrain, consisting of AB and JG as well, but not only. Well, well, a rather unknown, a so-called Larifari Mascot, needs to compete in the name of that team by the sponsorship done of Bahrain, mainly, yes, but, have a guess, not only. Haha, hard! Second, from 24th of July to 8th of August, there'll be the Olympic Games in Tokio. Presently, the two times olympic champion, Alistair Brownlee (2012, 2016), takes into account to make a golden slam, to both win in Tokio olympic distance and on Hawaii ironman distance the second Saturday in October. Maybe Javier Gomes is the dark horse among those top-professionals. Unfortunatelly, me I myself Micho, well, I am not allowed to go to Tokio in my function as a psychologist ("Larifari Mascot"), but need to hold the line in Germany, let's call it like this, at 2nd of August Eastern seas at OM (Ostseeman) along the magical of 226 kilometers. Moreover, Team Erdinger is under pressure as of the DNF from former champion PL, who won the two years before (2017, 2018). Patrick Lange and team-mates need to do something to make fade out the disaster on Hawaii, worldchampionships, this year (Grütze, we call it like this: Patrick made Grütze in 2019). Moreover, it is questionable how many competitors from Germany do start in Tokio. Moreover, it is questionable if German SK Sebi Kienle can come back to the top and make a 2nd title. Further, Canadian top-triathlete LS is in brilliant shape, presently. If Lionel Sanders can proceed like that it wont be easy for JF to defeat AB and LS and celebrate his 4th triumph on Ali'i Drive Kailua-Kona, Hawaiiian Islands. Finally, the most important is to press thumbs for IRONMAN JF and IRONLADY AHA in Roth. The WRs are done there and at 7:35 h min made by the Frodominator himself in 2017, and CW Chrissie Wellington 8:19 h min in the year (yeah!) of 2010. Can Anne Haug be faster? By using the new top-model shoe from Nike called Vaporfly? 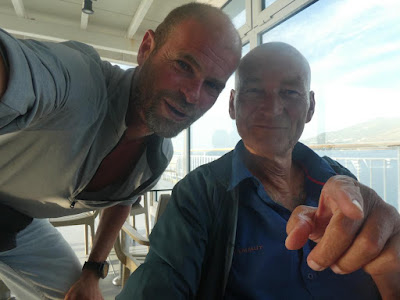 Does it look like "Larifari" ? No, it does not, does it? Micho with STAR TREK Captain Jean-Luc Picard.

Thus (if 'OHANA stays right [does; allright ciao]), well, if all wents fine, there might a ber (no aber; a beer in any case & be a; [those hackers ;) ] co-author's note) ticket to Hawaii for competition or coaching. We'll see, may be thoise active PROS mentioned above need some mental support in order to get arses kicked?!

In most humble distance and with great greet to the state and the piccadilly station nation, non-violently, but militarily: