Frankfurt once loved me...

Yes, Frankfurt once was place of getting honors and merits. This year not so. The 28th of October had been the most cold day of the month. Some athletes did not dare to breath like normal and used mouthpiece. It was cold, very cold. And coldness isn`t a feature that supports a marathoni and a maratonni (derived from the word ton; it is said that marathon-runners or so-called marathonis over 80Kg are called maratonnis) like me. 83 Kg are better than 88 - like in summer 2018 - for a 1.92m male, but still four kg to loose till Nice in June. And now, even worse for to stop being a "fatty", its going to be winter, the time the body looks for fats, sweets and special dishes like roast pork in gingerbread sauce. Or take glowing wine. The wine is served hot at Christmas-Markets. It is not only our stone-age-body does look for good nutrination in order to manage to by pass winter, no! Jesus...

Having been in 1st class hotel in Frankfurt, thus thank you to sponsors, it was really a relaxed thing to be in Frankfurt. Frankfurt, the capital of money in Europe and probably, according to conspiracy-theorists, in the world also. There is no real value of New York Stock Exchange Market, no Moscow Money and no Nikkai, and yes, the bank of the bank, the bank of world's most influence and stability, the EZB, is in Frankfurt. Frankfurt's size on the financial market cannot be overestimated, esp. when those brokers took over control of London (EN). Greetings to the city and also to the crown? Frankfurt is not a million-town, it is million billion town.

Once I competed IRONMAN European Championships in 2013 (race report here on the blog, too). Five years later it had been time to be in Frankfurt again as of sports in order to run the MAINOVA Frankfurt Marathon. More than 12000 ahtletes had registered. About 9700 started and from them 97% finhished on a 42, 195 Km flat course that very windy day that does cause athletes use mouthpieces while running through that big banks' skyscrapers' ravines. Wind blew like hell, so that one needed to lean forward in order not to fall backward. Even the way back from HOECHST industrial section, a block that has the size of an own town intself and thus its own bus-shuttles, which had been part of IG Farben by the way, the big "Nazi"-Concern splitted into Bayer, Basf and Höchst after World War II, back to the bank-section, well, wind was stronger than in Manchester, but much more cold. That day we had air-stream from the polar-region.

For me the fisrt two 5k-loops throughout the streets, guarded by skyscrapers, had been not that much nice. Too many people. Pace decellerated, when streets became narrow. And then? Having left the city as of the coldness I needed to go pee... - and stepped into a mobil toilet, while others peed under bridges and in parks. Luckily I got that free toilet. Otherwise more time would have been lost. But nevertheless, I lost the 3:15 h target-time-runner out of sight. So somewhere, running, passing by many spectators, who made noise, sound and action with drums, horns, disco-loudspeakers and clapping hands, I recognized I was fighting the flu! When adrenaline sunk, I noticed I did not get warm. No way to get warm that day. Even not at K25. So what to do? What is the difference between a 3:23h and a 3:26? For personal best I needed to run below 3:05 h. Not that arctic day. So I just continued running and kilometers passed by easily. At K30 no "man with the hammer" waited. There was no "tunnel gaze". Rather unemotinally I gave up fighting, did not fight for a pretty fast time. What else to do? Even the last 200m onto the red carpet no fighting for some seconds in order to make a 3:26 instead of my final-result of 3:27:10 h min sec. Sure, others would be happy to receive such a result. The average time overall is 3:57 h. So I am 30 min faster then average. But still...  In sum personal best was not really within range that day so I altered to plan B to do a long training run. The benefits of this that strategy had been no damaged muscles. The next day stairs both up and down had been done forward, and not backwards like it is typically for a marathoni race after. 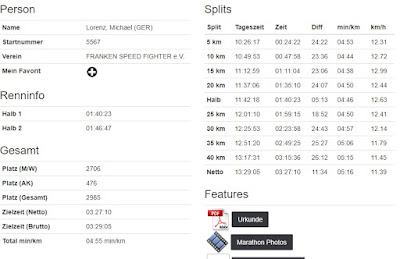 Having worn and shown my yellow 365/247 trikot from Grafenberg Military Training Area / Germany, that had been a present to me - also this way greetings to a friends - at the finish-line and for the cameras I found satisfaction.

What is next? May be the Hamburg Marathon in April...