it is rather hard to write about that race. Because after 15 years on TRI(athlon) and a finisher-quote of 100.00% exactly according to DNF is no option, well, at 19th of June 2022 I suffered my 1st defeat. I finished, in 2:42 h min, ranked 162, but how. And was defeated. But really? Race after analysis helped.

To make it short and tighten: after having finshed IRONMAN NICE the year of 2019 in France at 44° Celsius, I underestimated the weather like "if can finish 226k at 44°C, well, 30° C + no problem at all!". However, it had been 36°C in average, measurement of time in the lake at a water temperature of 24,4°C calculated in. So, not likewise in Nice, wet-suits had been forbidden.

Felt rather good in the water. After succesful test in Weiden (C-Prio Race) I degraded the race from B- to C-priority. Thus, swimming was smooth and fun but got shocked 10th to 12th out of the water my start-group best male amateurs. Was unbelievable slow with 28' 52 sec transition time not included, ranked 102nd out of all swimmers inculding the 80 top male and female athletes (waves 1, 2 and 3) as well. 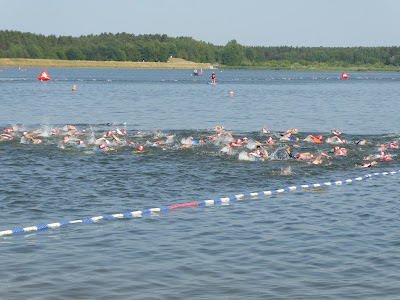 Micho somewhere in the rockin' pack shortly after top amateurs' (wave 4) start at the shore lake of Roth.

What to do? Lost 4 minutes in the water and hang loose wasn't an option anymore. I had to attack in order to make a good time. Thus, I decided to make loss of time not more worse, to ride harder than planned but not too hard in order to pace fast the 3rd discipline faster than in Weiden clocking 4:00 min sec /k, and realtered the race to B-Prio and thus a real test all out and RACE HARD.

Was fun felt strong and pushed rather hard. In 2017 my time at relay bike only was 1:12 h min. That Sunday, with 1:15 h min without transition time all went fine. However, heat was on the street and I ignored. The last 5 of the 42k I felt done on my time-trial bike and took out to attack on the run split. All not too bad, despite of bad swim-split and thus personal best (2:19 h min that race that courses) was out of range. Meanwhile and that was pretty uncool. What to do? Sub 2:20 no way, ok, than it had to be a sub 2:30 h min like planned for that a C-Prio race even valid in the morning race before. 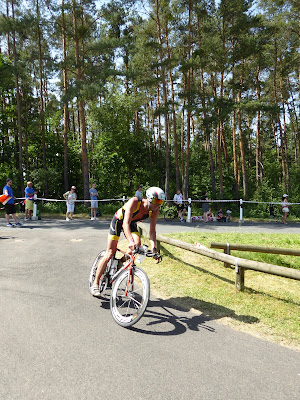 Approaching transition-zone after 42k on bike, not so many spectators to see, may be as of the heat.

The first 700m I felt good, and like when personal best pacing was 3:35 min sec a k like that. But then, when Km-1-sign came in sight, speed dropped down and I felt power did drain. And nothing to do against it! Thus k1 I bypassed at 4:04 min sec, not too bad, but power did not come back. Thus I took out a little the 2nd k was 4:30 min sec. Meanwhile I felt it became hot (38° Celsius), and the gravels did not only reflect the mere sun impact, but also dust on the track as of a draught. K3 was already close to 5 min and this was my mental collaps. Finally, final time and the result would be a disaster. Well, 1st lap was 28 min 5k but it became even harder and my decision was to finish correctly with a smile in my face despite of all felt beaten up. Pace went down to 5:30 min sec a k like in training and even slower and I questioned if I needed to seriously quit drinking alcohol and a cigarette from time to time, or if I have Covid-19. Was hard to breath. K8 to k9 I realized, like in Nice, that cold showers helped. Too late. Moreover I drank too less and lost 3,5 kilograms that race, not yet really dehydrated, but still. 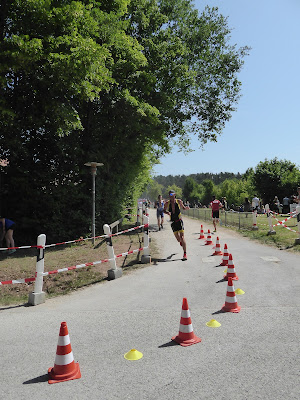 Closely to the end of  lap 1 out of 2 at k5 on a hilly run course here on asphalt much more nice to run but on sandy and gravel ways, too.

Here you can see the two main effects (in red). FACTOR A consists of heat, humidity and most critical there was no time for acclimatisation as of temperatures were below 30° C at Saturday and between 25°C and 28  degrees Celsius the weeks before and this "compound" component created terrible interaction effects. FACTOR B was a wrong mind set, I mean what to do in a second test-race for priority-A competiton at Baltic Sea Man (OstseeMan OM 226k) in August, when first test race in May was a success already, thus somehow I got fixed to the idea to compensate that mental leakage by making a time closely to personal best by a wrong motivation in combination with having set race to false prio race before, and realtered priority from C to B, correctly, but while racing (FACTOR B). 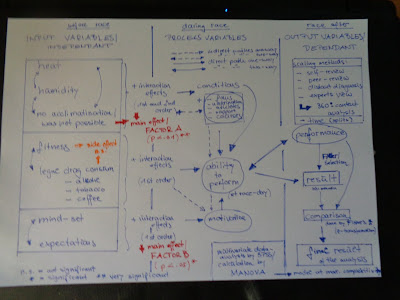 Am pround to be a finisher the day after and this reminds me of what is the most important. That we are all triathletes no matter of times.

P.S.: hang loose, yes, always, but DO NOT ALTER  race-priorities unlike planned slightly before a race & especially DO NOT REALTER prio during the race. If you think professional. ;)